This Month in Cybersecurity (November 2020) 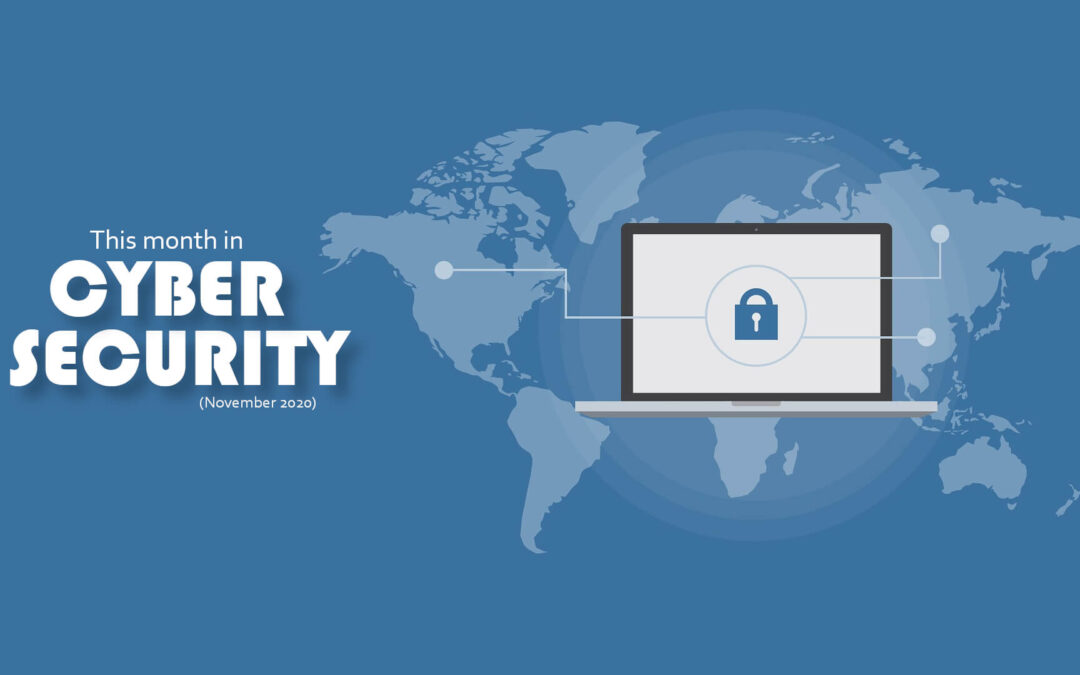 With the constantly evolving world of technology, it’s no surprise that every month there are new vulnerabilities discovered and existing weaknesses patched.

This monthly article will detail the biggest news in cybersecurity to raise awareness. Take no risks when it comes to the security of your company.

US Fertility, the largest network of fertility centers in the U.S., says that some of its systems were encrypted in a ransomware attack that affected the company two months ago, in September 2020.

“On September 14, 2020, USF experienced an IT security event [..] that involved the inaccessibility of certain computer systems on our network as a result of a malware infection,” USF said in an official statement.

“Through our immediate investigation and response, we determined that data on a number of servers and workstations connected to our domain had been encrypted by ransomware.”

Third-party forensic experts were retained by USF immediately after detecting the attack to help investigate the security incident.

USF took down the impacted servers and workstations after discovering the attack. USF was able to restore them with the help of third-party computer forensic specialists and reconnect them to the network on September 20.

The fertility network also informed federal law enforcement authorities about the ransomware attack and continues to work with them throughout the incident investigation. Read more on BleepingComputer…

The personal and health information of more than 16 million Brazilian COVID-19 patients has been leaked online after a hospital employee uploaded a spreadsheet with usernames, passwords, and access keys to sensitive government systems on GitHub this month.

Among the systems that had credentials exposed were E-SUS-VE and Sivep-Gripe, two government databases used to store data on COVID-19 patients.

E-SUS-VE was used for recording COVID-19 patients with mild symptoms, while Sivep-Gripe was used to keep track of hospitalized cases.

The leak came to light after a GitHub user spotted the spreadsheet containing the passwords on the personal GitHub account of an employee of the Albert Einstein Hospital in the city of Sao Paolo.

The user later notified Brazilian newspaper Estadao, which analyzed the data and notified the hospital and the Brazilian Ministry of Health. Read more on ZDNet…

Routinely check the access levels of your employees. Highly sensitive data should only be available to those who actually need to view or edit it.

The Federal Bureau of Investigation has sent out a security alert warning that threat actors are abusing misconfigured SonarQube applications to access and steal source code repositories from US government agencies and private businesses.

Intrusions have taken place since at least April 2020, the FBI said in an alert sent out last month and made public this week on its website.

The alert specifically warns owners of SonarQube, a web-based application that companies integrate into their software build chains to test source code and discover security flaws before rolling out code and applications into production environments.

But the FBI says that some companies have left these systems unprotected, running on their default configuration (on port 9000) with default admin credentials (admin/admin).

FBI officials say that threat actors have abused these misconfigurations to access SonarQube instances, pivot to the connected source code repositories, and then access and steal proprietary or private/sensitive applications. Read more on ZDNet…

These are just 3 of the biggest cybersecurity breaches in November 2020, you can read about hundreds more here.

Our expert team at DIS Computers can handle all of your cybersecurity needs. Get in touch to discover what we can do for your business.